If you’ve engrossed time into Minecraft, you’re probably aware of how important anvils are to the game. However, anvils do come with an expiry date, and when broken, they need to be replaced.

Developed by Mojang in 2009, Minecraft is a sandbox video-game programmed by Markus “Notch” Persson in Java. It has since been ported into numerous platforms, such as the Xbox and Playstation, and even smartphones. With over 100 million active players every month, it has become the best-selling game of all time!

Minecraft is based on a blocky, procedurally-simulated 3D world, where the players can mine resources, and build from them. The premise of the game is to survive using only one’s wits and the resources around him/her. Over the years, Minecraft has expanded to multiplayer, with custom-hosted servers and mods.

Intriguingly, the eminence of Minecraft hasn’t died down even after a decade, and it has made its way into pop-culture. In 2014, Minecraft was procured by Microsoft for $2,500,000,000. Since then, the franchise has produced spin-offs, such as Minecraft: Story Mode, Minecraft Dungeons, and Minecraft Earth.

What Is An Anvil In Minecraft?

“Anvils! Your sword can now be a “Dragon’s Tooth” if you want, or you could just repair it a little.”

Primarily, an anvil is an item in Minecraft that permits you to repair items, rename them, and even combine enchantments. You can find it a damaged anvil in the “Forge Room” of the Woodland Mansion. 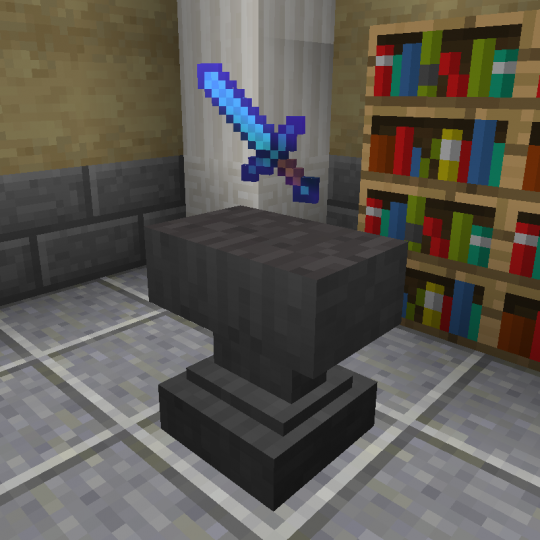 How To Obtain Them?

You can loot them from within the map! Anvils can be mined with any pick axe, however, mining them without one will yield nothing.

Another method is to forge one with a crafting table if you own the appropriate ingredients – block of iron and iron ingot.

Anvils can also be used to repair certain items if the particular materials are present. However, not all the items can be repaired. For instance, an anvil can repair an iron pickaxe with iron, but it cannot repair bows or shears unless other bows or sheers are present.

Any items or stacks of items can be renamed at the cost of one level along with any penalty before the renaming. You can rename any item for a maximum cost of 39 levels, with a maximum limit of 35 characters per name.

An anvil can be used as an alternative to an enchantment table, as it can combine enchanted books to form better-tiered books.

How To Make An Anvil?

Before I mention how you can forge an anvil, you have to ensure that you own all of the required materials – 3 blocks of iron and 4 iron ingots, or 31 iron ingots in total.

Data Values For The Anvil: