Have you been wanting to use the Booming Blade in Dungeons & Dragons, but don’t know if you should? Worry not, because, in this article, I will provide a breakdown of the cantrip, clarifying the advantages and disadvantages of the spell, and when you should use it.

What Is Dungeons & Dragons?

Designed by Gary Gygax and Dave Arneson, Dungeons & Dragons, also known as D&D, is a fantasy table-top role-playing game, which was published in 1974 by Tactical Studies Rules, Inc. (TSR). It is a derivative of miniature war-games, with the rule-system being from the 1971 game, Chainmail.

D&D permits each player to form their own character instead of a pre-set one. Once formed, these characters embark on a fantasy voyage with imaginary ventures, overcoming obstacles, such as dilemmas, battles, and gathering treasures, along with other characters (players). A Dungeon Master (DM) attends as the game’s referee, assigning quests, telling stories, retaining the scenario of the game, all the while playing the role of residents in the fantasy world.

D&D has become a significant part of modern pop-culture and has made its way into controversies with religious groups. D&D is commonly renowned as the beginning of the modern role-playing game industry.

What Is The Booming Blade?

Booming Blade is arguably one the most over-powered damage-dealing cantrips, although, this is the opinion of a few people. If you cast it with a low-level caster, it’s not as effective as it is supposed to be. It appears that you have to practice with this spell in order to make it worthy. For one, you are required to perform a melee attack, that actually hits, and the opponent has to be moving while the spell is cast – only then will it be active!

However, at the 5th level, the spell does more damage even if the opponents don’t move, and even more damage if they do. Hence, you can avail the benefits during combos! It’s worth mentioning that since the spell takes an entire action, it isn’t as worthwhile for characters with multiple attacks, such as the Eldritch Knight.

DESCRIPTION: “As part of the action used to cast this spell, you must make a melee attack with a weapon against one creature within the spell’s range, otherwise the spell fails.

On a hit, the target suffers the attack’s normal effects, and it becomes sheathed in booming energy until the start of your next turn. If the target willingly moves before then, it immediately takes 1d8 thunder damage, and the spell ends.

This spell’s damage increases when you reach higher levels.

At 5th level, the melee attack deals an extra 1d8 thunder damage to the target, and the damage the target takes for moving increases to 2d8. Both damage rolls increase by 1d8 at 11th level and 17th level.” 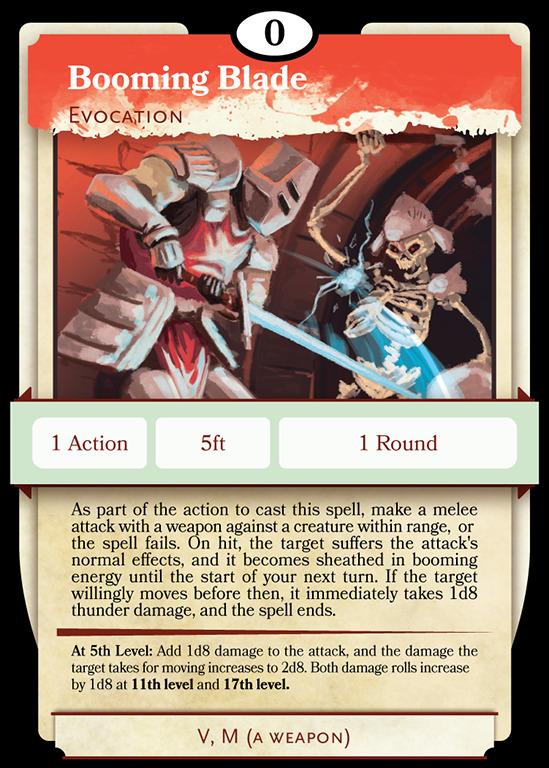 When Should You Use It?

You should be using the Booming Blade whenever you are in hand-to-hand melee combat, and only when it is at a higher level. Your opponent does not need to move out of the booming-energy field to hit you because you should be right there after you are done performing the attack. Even if you have a low-hitting die, the extra damage-hit will make up for it.

However, if you’re someone who casts spells frequently, you would not want your character in the middle of a melee combat – low damage, health, and strength are a certainty for loss! You can find a spot to take cover in and take potshots at the opponent if your team is able to keep the enemy static.

If you get involved in combat against an adversary who knows Counterspell, it would be better to move to a regular melee attack – they are likely to be in the same circumstance as you; low damage, health, and strength, which means that you two are even, and only the die can decide the outcome.

Also Read: What Is The Meaning Of The Boondock Saints Prayer?

How to play it safe with igaming platforms

Earn Money Together With Tennis Players

Overwatch Vs Paladins – Which one is the Best?

League of Legends: A Critical Error Has Occurred and the Process must be Terminated [Fix]